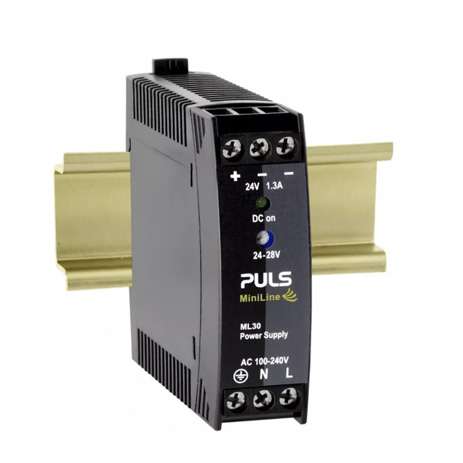 Operation Mode 1: Parallel Use to Increase Output Power
ML30.241 power supplies can be paralleled to increase the output power. This power supply has no feature included which balances the load current between the power supplies. Usually the power supply with the higher adjusted output voltage draws current until it goes into current limitation. This means no harm to this power supply as long as the ambient temperature stays below 45°C.

Operation Mode 3: Series Operation
Power supplies of the exact same type can be connected in series for higher output voltages. It is possible to connect as many units in series as needed, providing the sum of the output voltage does not exceed 150Vdc. Voltages with a potential above 60Vdc are not SELV any more and can be dangerous. Such voltages must be installed with a protection against touching. Earthing of the output is required when the sum of the output voltage is above 60Vdc. Avoid return voltage (e.g. from a decelerating motor or battery) which is applied to the output terminals. Keep an installation clearance of 15mm (left / right) between two power supplies and avoid installing the power supplies on top of each other. Do not use power supplies in series in mounting orientations other than the standard mounting orientation (input terminals on the bottom and output terminals on top of the unit). Be ware that leakage current, EMI, inrush current and harmonics will increase when using multiple power supplies series.

Operation Mode 4: Operation on Two Phases
The power supply can also be used on two-phases of a three-phase-system. A phase-to-phase connection is allowed as long as the supplying voltage is below 240V+10%. Use a fuse or a circuit breaker to protect the N input. The N input is not internally protected and is in this case connected to a hot wire.